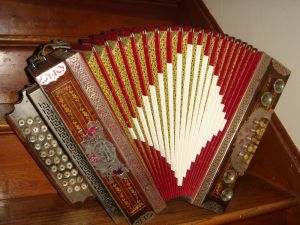 Richard  L. “Dick”  Demsher, 88 of Houston passed away peacefully on Sunday, July 7, 2019 in Townview Health and Rehabilitation in Canonsburg.

He was born on May 31, 1931 in Sheboygan, Wisconsin to Louis and Helen Premro Demsher who preceded him in death.

Mr. Demsher was veteran having served his country honorably in the United States Air Force during the Korean War.  Dick earned a diploma from Pittsburgh Institute of Aeronautics as a Master Aviation Mechanic.

On September 15, 1956 he married the love of his life, Elizabeth Telesko who survives.

He was employed as a Produce Manager for Shop ‘n Save and for Kroger for several years until his retirement. After his retirement, he drove patients to appointments for Country Meadows for 17 years.

Mr. Demsher was a passionate button box player and was a member of the Western Pennsylvania Button Box Group. He had many interests and hobbies including collecting Nascar cars and trains. He loved “discussing” politics and held his ground when engaging in discussions with others regarding his political views.

Dick was a very dedicated husband and took great care of his wife throughout the years of their marriage.

In addition to his wife Elizabeth, he is survived by his son Ronald R. Demsher (Donna) of Boston, Massachusetts, his daughter Rene O’Brien (Bobby) of Washington, his brother Bob L. Demsher, of Tampa, Florida, his sisters Shelby D. Estoker of Canonsburg and Rosalie Hilderbrand of Strabane, his two grandsons Mike Demsher and Nick Demsher and many nieces and nephews.

To send flowers to the family or plant a tree in memory of Richard L. "Dick" Demsher, please visit our floral store.